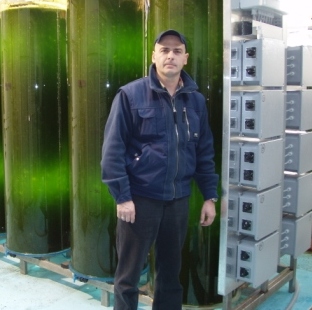 Mr. Nikolaos Karatarakis is Separeco's Exclusive Agent for East Europe, Middle East countries and Africa since 2005. Thanks to his effort and business development skills, Separeco's Fitoplan technology is the indispute leader in phytoplnakton production in the fishfarming industry in all that areas.

Mr. Nikolaos J. Karatarakis is a biologist with a Master's degree in Aquaculture and in Business Administration. He is 55 years old and he has established a very important career in the field of acquaculture sector both in Greece and abroad. He has a thorough, well documented experience in all the aspects of the sector which he has been serving with absolute professionalism and with profound integrity since 1989. During this period he has developed mutually beneficial business by collaborating with companies such us RIO PESCA, SELONDA, NIREUS, HELLENIC FISHFARMING, AQUATECHNA, SEPARECO, KORAL FISH, BADINOTTI, BLUE ISLAND, ABALIOGLU and by actively working in countries such as GREECE, TURKEY, CYPRUS, ITALY, FRANCE, ALBANIA, TUNISIA, SAUDI ARABIA, UNITED ARABIC EMIRATES. For the last 10 years he has devoted himself in operating as a Business Developer in various aquaculture projects, of different magnitude scale and complexity, in many geographical areas of the world.